Photos From the Week 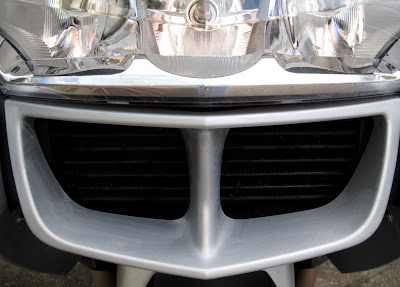 With a full week of good weather things lined up nicely to acquire some quality saddle time.  Although I was "Riding and Thinking," rather than post any particular thoughts I decided to share a few photos from the week. Nothing earth shattering just some doodling with the camera.

The one above is the oil cooler radiator vents.  After doing the brakes last Saturday I washed and waxed the bike.  If you look closely you'll see the haze of dried wax yet to be polished. Kind of a different view. 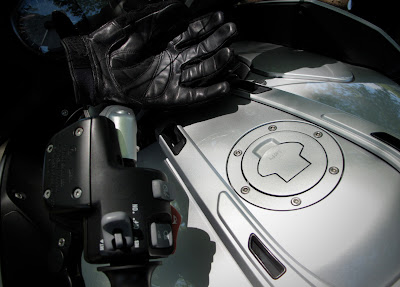 Yesterday while working in Corvallis I parked under a large shaded area. 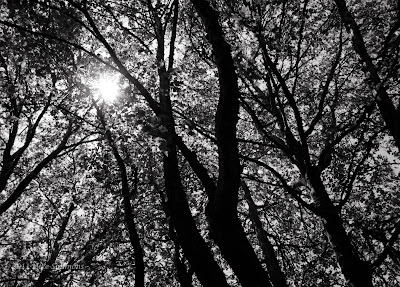 Something caused me to look up and I noticed how the branches seem to be leaning toward the sun. These old trees make a nice big shade canopy. 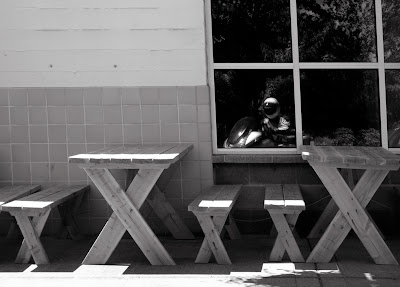 Before leaving Corvallis I like to stop at Great Harvest Bread to get something before hitting the road for home.  Instead of taking the Interstate I took the country way through small towns.  I happened to get behind a guy on a cruiser bike.  Out in the country we rode at a good pace but in the towns he went pretty slow and kept a large distance away from the car in front of him.  I try to learn what I can from these experiences.  I realized that I tend to drift in a little too close sometimes when following traffic.  The obvious problem with this is when traffic stops suddenly.  The other issue, which I don't think of as often as I should, is road debris.  It's harder to see and react when following too closely. 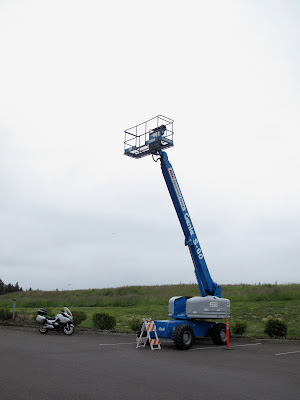 This was today behind one of the hospitals I visit.  It would have been nice if I could have gotten the bike in that lift.  Looks like it's waiting in line for the next ride. 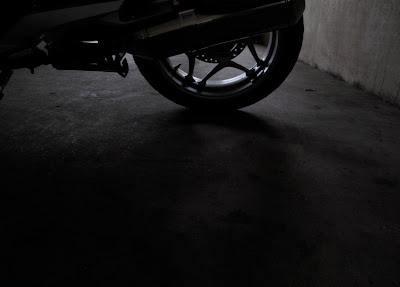 Today I had lunch at a mall.  While walking back to the bike I noticed the light gently bouncing off the back wheel.  This shot looks a little lonely but in my humble opinion the mall is actually a happy place.  The sun didn't show up today so everything had the Northwest shade of gray.

Just some doodling with the camera while on two wheels.