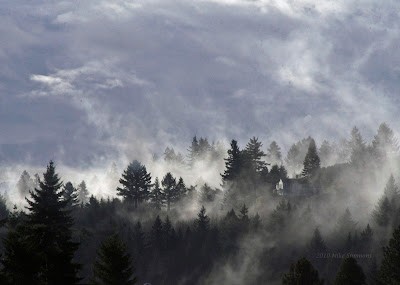 The weather has not been the best for riding lately, at least in my humble opinion.  Tonight I don't have a ride report or motorcycle photos as the Beemer is tucked away safely in the garage.  So with that in mind I thought I would wish all of you wonderful fellow bloggers and non-bloggers a very happy and safe New Year.  Thank you very much for visiting this blog this year and for your much appreciated comments.

This holiday weekend is a great time to not only reflect and be thankful for life and all the blessings we have but also to look ahead to plans and goals for the coming year.

My darling wife, Amber, surprised me with an iPod Touch 4 for Christmas and I must confess it's been hard to put it down since then.  Last night all of our family came over to celebrate Christmas.  This afternoon I put together an entire video including photo images and music.  It was an entire iPod production using iMovie.  I just might turn into more of a video guy.

The image above was taken a couple of weeks ago from the hospital room where our new granddaughter was born.  The house on the slope is facing the sun as a new day dawns.  As we face the coming new year I wish you peace and joy along with many safe riding miles. 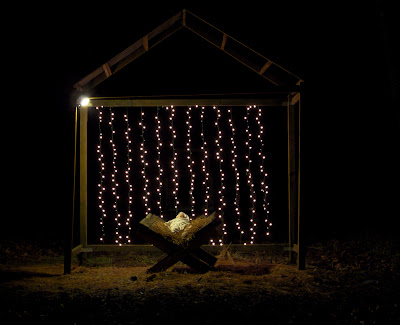 (A manger scene along the road near our house)
"He is the image of the invisible God, the firstborn of all creation.  For by Him all things were created, both in the heavens and on earth, visible and invisible, whether thrones or dominions or rulers or authorities--all things have been created through Him and for Him. He is before all things, and in Him all things hold together."  (Colossians 1:15-17)


MERRY CHRISTMAS FROM OUR HOUSE TO YOURS!
Posted by Mike at 12:06 AM 7 comments: 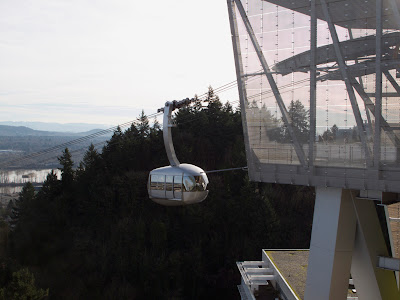 The hospital were our new granddaughter was born last week has a Tram that carries people to another location with medical buildings along the river.  The Tram was completed about four years ago and has already become an icon for Portland.  I thought I would share some photos. 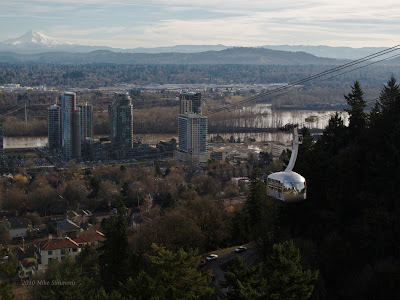 (Mt. Hood in the background) 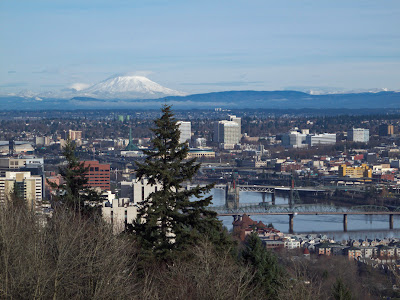 (Mt. St. Helens in the background) 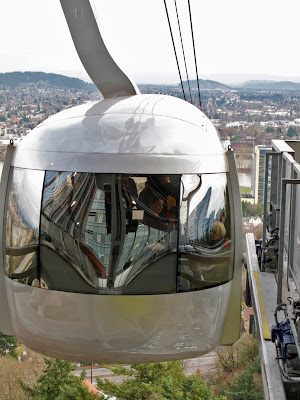 Traffic in the Country? 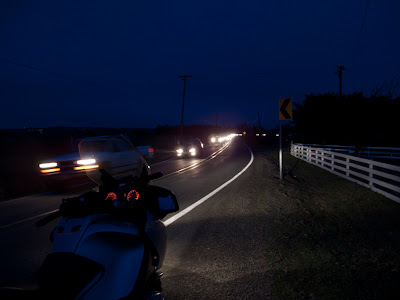 Coming home tonight after working at the jail I was surprised by the mile-long line of traffic going the opposite direction.  I know this road like the back of my hand and I've never seen this before so I had to pull over and record it.  It's really no big deal but traffic isn't suppose to happen in the country is it?  I mean that's why it's called country.  There are less houses and people. 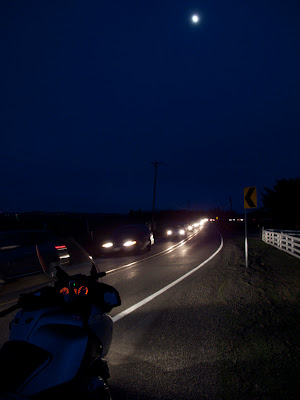 One bonus out of the event was turning the camera sideways and including the almost-full moon.

I got some interesting looks from the drivers while they passed by slowly.  My side of the road was smooth sailing until further ahead at a stop sign. 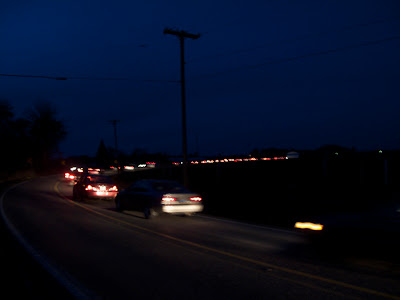 This shot is blurry but captures the unusual sight.  Ordinarily one or two cars might pass by while swooping around this curve.

I usually take the long way home but tonight in a small town at about the half-way point the road was closed due to construction.  For a split second I was bummed but then I realized it meant being on the bike longer to double back.

I don't care for traffic when on the bike but tonight I was just glad to be holding the handle bars again.  Maybe the traffic was a result of the detour or maybe an unusual infusion of Christmas shoppers.  Who knows.  All I know is it was good to be riding on an early evening in mid December with a full moon. 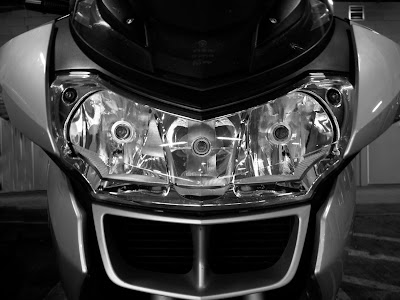 I rode briefly Friday which was only the third time in three weeks.  And late this afternoon after I got home I hopped on the bike and went to the vet to get medicine for one of our dogs.

Each day of not riding has had it's reason(s).  Some days have had unusual reasons like one day when I couldn't ride because I had to ship a fly fishing rod that I sold on eBay.  Some days I have too many phone calls to make so riding is too restrictive. 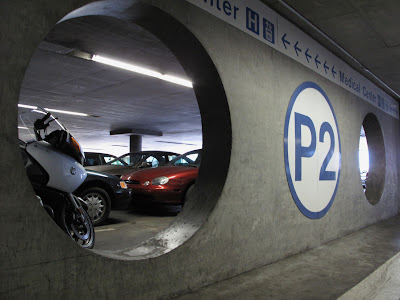 The ride on Friday was just right for peaking the desire for more.  It brought an awareness of not only how much I miss it but how one gets a little rusty on the skills after only a short while.

The other night I read an interesting article in BMW ON (Owners News) Magazine.  It's about a woman named Voni Glaves who happens to be on track to reach the one-million safe mile marker before her next birthday in December 2011. I tried to find the article in an electronic version on the BMWMOA's website but it's not there, so here's a link to another article about her.

Riding that many safe miles certainly gives her the ability to garner attention when it comes to advice.  Here are some of her successful riding tips. Some of these are obvious but they're good for review. 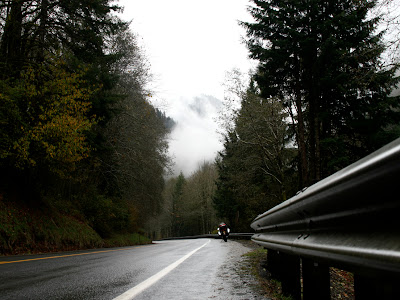 (Early autumn along Rte. 6 in the coast range)
On these evenings after a day of not riding it's good to settle in to my favorite chair with a cup of tea and a good motorcycle magazine.  It doesn't satisfy the void of not riding but in a small way it takes away some of the sting.

I hope you've been riding these days and have been keeping it simple and safe. 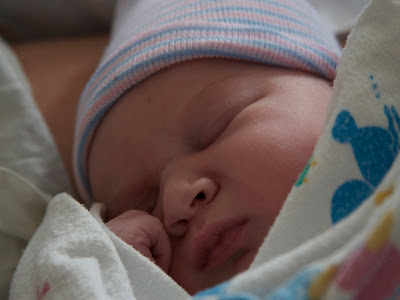 Yesterday morning, by the grace of God, Abigail Marie came into the world.  She weighed 10 lbs. 4 oz and was 21-1/2" long.  She and our daughter are doing fine.  We're the proud grandparents for the sixth time. 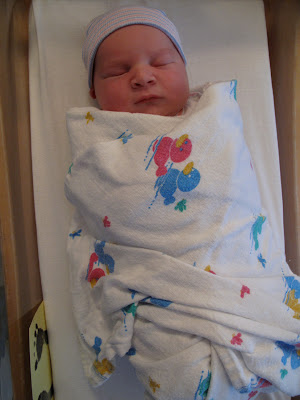 Stopping by the Big Field 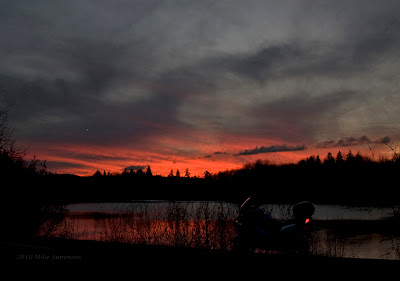 This was the sunset this evening as I stopped by the big field near Jackson Bottom Slough.  What a gift it was.  I worked at the county jail this afternoon.  This was a dramatic change in scenery only ten minutes after leaving confinement. 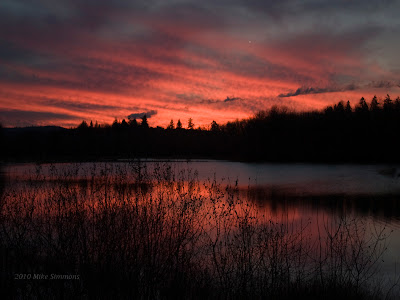 It makes me appreciate freedom.
God's speed.
Posted by Mike at 10:04 PM 8 comments: