Struggling with the Weather and the Whether 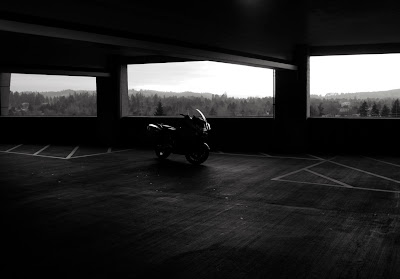 The last few mornings the weather has been unstable.  At our house we've had a mix of snow and rain.  Last night we had some snow flurries along with some rain which gave this morning a thin coating of ice and light crunchy snow on most everything.

I had a breakfast scheduled this morning with a couple of friends at 9:00.  Knowing that today's forecast was to be sunny and 45 (F), I did the usual checking the outside temp on the house thermostat and looking at the current conditions online.  Then I looked outside and saw the ice but it didn't look too bad.

Then the little voice from the area around my left shoulder whispered in my ear, "You can ride anyway. Don't worry, it'll be okay.  After all, by the time breakfast is over it'll be sunny and warm and everyone will be riding."  Then the voice from the other shoulder whispered, "No, it's too icy and there's too much risk of going down and scrapping up the bike."  Then the other voice said, "But you can go slowly where you need to.  Go ahead it'll be fun."

Do you ever have this "discussion" in the morning?  Struggling with the whether... that is the whether to ride?

In the end the voice from the right shoulder won out.  I'm glad I didn't ride because the roads were worse than what I was hearing from my left ear.  Of course hearing voices should be reason enough not to ride.

I didn't really hear voices but the struggle really happened.

Safety should always rule the day. 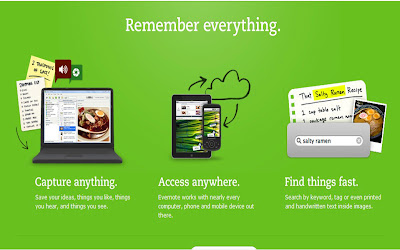 I've always been a nut about trying to be organized but the last ten years or so it's been a little more challenging to maintain that discipline.  Through the years I've used yellow pads, day timers, scraps of paper, Post It's, a PDA, and a mini tape recorder just to name a few.  Each of them fell by the wayside when it was replaced by the next system that I thought would really keep me organized.

A few years ago when I was contemplating getting a Vespa I discovered Steve Williams' wonderful blog Scooter in the Sticks.  One of his posts featured a manual organizing system called The Hypster PDA.  Using a series of 3X5 cards clipped together a person could easily and logically keep track of all their important information in one easy and inexpensive setup.  I was intrigued by this and began using it.  Unfortunately, like all of the other methods of arranging personal information, it too fell by the wayside.  For the last few years I've tried to be diligent about keeping all my information on my company issued Blackberry.  For the most part it has done well but there are things I'd like to tweak.  Then I discovered Evernote.

My wife Amber got me an iPod Touch for Christmas.  For about the next five days I had a hard time putting it down.  While making a note in one of the apps that I had downloaded I was asked if I wanted to upload it to Evernote.  I might be the last guy on the planet that knows about these note keeping Websites but my eyes were opened to a whole new realm.

For those of you who don't know about Evernote or any other notetaking suite, it's an online server designed for notetaking and archiving webpages, photos, voice memos, and even handwritten notes.  Just about anything that can be copied, pasted, or uploaded can be stored and kept securely in one convenient location.  All of it can be updated or edited via a computer or mobile device.

I've been using Evernote for about six weeks and I think it is a great way to keep notes and information organized in one convenient location.  I'm using the free version and finding it handy that everything is accessible at anytime from my Blackberry or iPod.  For a small annual fee more storage is available with even more security than the free version.  By the way, I have no stock or stake in Evernote.  This mini review is purely from the perspective of a new user.

I still use a spiral steno pad for daily quick notes as the day progresses. I can get a call at any moment from a customer who is ready to give me information I need to write down.  From this pad I can easily sort things out on Evernote if I need to.  At times there's no substitute for a good old fashion note pad.

Since this blog is about thinking and riding and maybe I've covered somewhat of a thinking segment, I thought I would throw in a few images from this week. 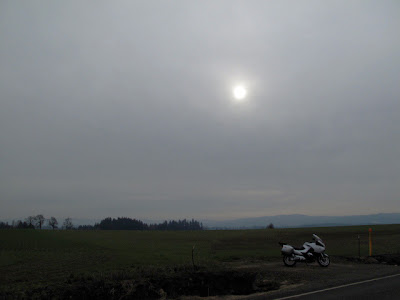 This afternoon on the way to the jail. 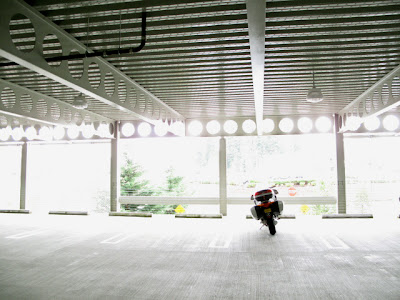 (Monday - Vancouver, WA)
Looks like an alien spaceship just dropped off a motorcycle. 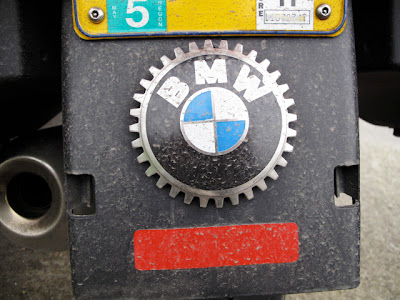 (This morning - Oregon City, OR)
No matter how hard I try, this time of year it's hard to keep it clean.  I'm not complaining because some can't ride due to snow and ice. 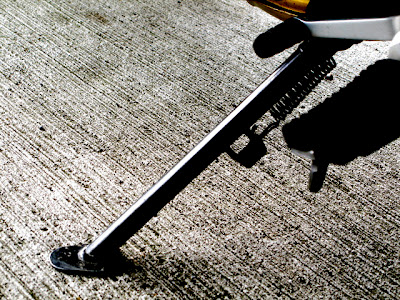 (Monday - Vancouver, WA during the alien thing)
May your kickstand be in the up position this weekend!
God's speed.
Posted by Mike at 8:09 PM 11 comments: