Trip to the Coast 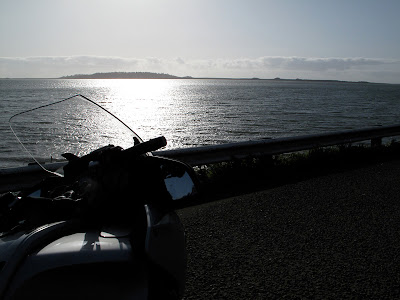 I don't know if I've written this statement before but I wish I had discovered the bliss of motorcycle traveling years ago.  Last week I had the privilege of working on the coast for a couple of days. 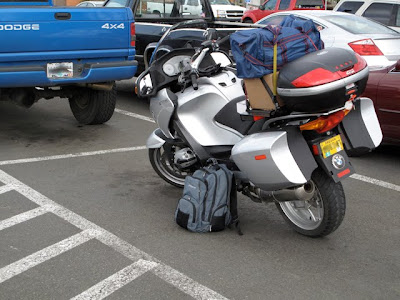 I'm still delivering our new catalog.  Here's my first stop on the way to the coast in Grand Ronde with the bike loaded with 10 catalogs plus my gear. 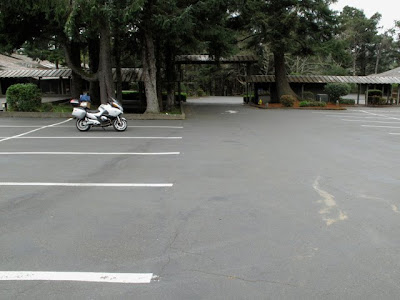 About 15 miles north of Newport on the coast is a famous resort called Salishan Lodge.  This landmark golf resort is usually bustling with people and cars. This time of year they're generally busy with corporate meetings and banquets but as you can see the parking lot is pretty sparse. 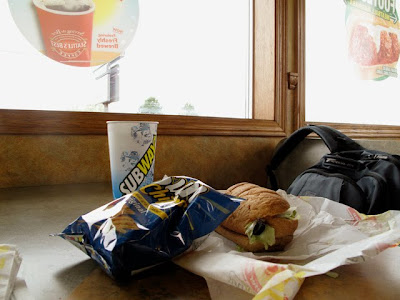 Lincoln City and Newport are two large cities on the southern end of Oregon's north coast. I usually make a couple of sales calls in Lincoln City before heading south to Newport, about 20 miles away.

Lunch in Newport was my usual fare of "eating fresh" at Subway.  There were two older guys who had big Harley touring bikes eating lunch here as well.  A third guy who was in line with me also is a Harley owner.  We had a nice brief conversation about motorcycles before he joined the other two guys.  When they left I noticed the leather vests on the first two guys.  It said, "Vietnam Veterans - Newport, OR" I think that's pretty cool to be in that group. 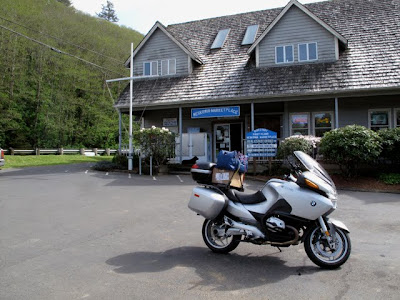 After working most of the afternoon in Newport I usually head back north through Lincoln City for the 60 mile ride to Rockaway Beach where I'll spend the night. This market in Neskowin is about 15 miles north of Lincoln City.  It's in a great spot to grab a soda and maybe a candy bar.  The candy bar is to keep my focus sharp and I only indulge once and awhile. At least that's my theory. If you look closely, this market comes complete with a dog on the porch. 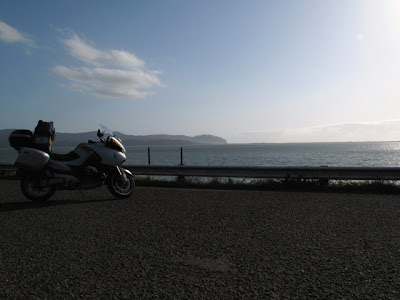 This is "The Ghost Hole".  It's a popular Tillamook Bay fishing spot. The first photo of the post was also taken here.  This is also a popular view-point for the Bay.  The two posts that you see in the water are for mooring a small dock that has portable bathrooms during the fishing season.  Fishermen have been known to drink a beverage that increases bladder activity. 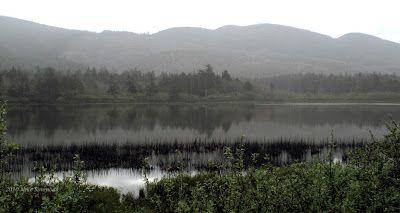 This is Lake Lytle in Rockaway as I left town Friday morning. This is only about 90 miles from downtown Portland yet so different.  Being almost due west of Portland, Rockaway was a popular vacation and weekend get-away spot in the early 1900's. It was Elmer Lytle who promoted the first steam engine train that ran from the western edge of Portland's farmland to Rockaway in 1906. 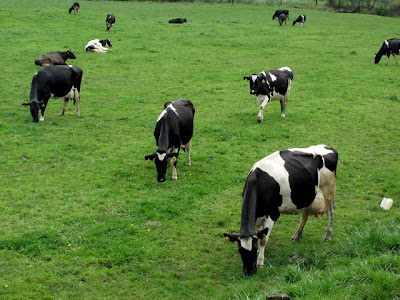 After making more sales calls in Tillamook I had lunch before the ride through the coastal range back to Portland.  Heading out of town through the dairy farms I stopped to check out some of Tillamook's most prominent citizens. 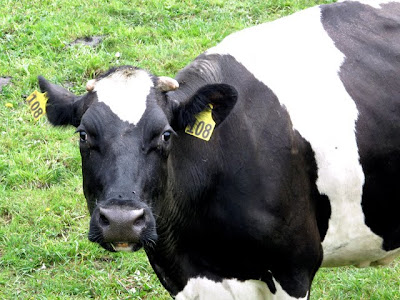 Evidently it's been quite some time since number 108 has seen a guy wearing a white helmet with a day-glo green jacket.  She came over to get a closer look. 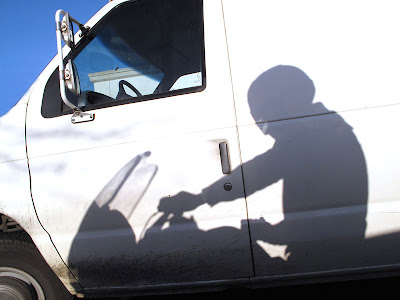 Once in awhile a shadow or reflection might appear on this blog but it's usually a spontaneous thing.  I went to the grocery store early the other evening.  As I got on the bike to leave so did my shadow.
Posted by Mike at 9:32 PM 13 comments:

Okay, now I want to do video!

Bobskoot made the mistake of asking on a comment for mounting tape for his video setup.  I happened to find Filmtools.com and stumbled onto this video. It's pretty cool to see the versatility of their mounting rig.

There are some places where I'd like to have a video camera to capture the expanse and beauty while riding, for example, Mt. Hood or the Gorge.  You probably feel the same way.  Some of the landscapes we see while riding are pretty amazing. 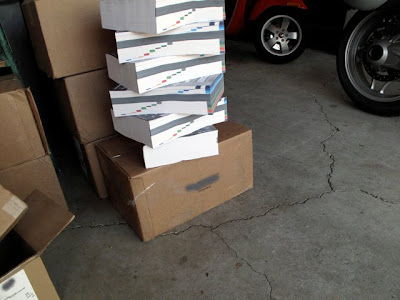 Late last week our company rolled out a new catalog that's the largest we ever had.  For those of you familiar with Grainger, ours is slightly larger but weighs less because we used recycled paper.  Monday and Tuesday I took the car so I could haul more catalogs to freely disperse.  Today though, the weather was too nice to be in the cage.

With a little planning I managed to get six of them on the Beemer, although I think I can get a maximum of 10 on board.  I can bungee a case of 6 on the seat behind me and then put 2 in each side case.  Of course it can't rain with this setup so we'll see how many more days I can do this.  The plan is to hand present the new catalog to the largest accounts.  All others will get one with their next order, hopefully prompting their next order.

I know that many of you are planning to come to Oregon for the BMW Rally in July.  I commend you for your packing ingenuity.  Bringing as much as you can stuffed into every nook and cranny can be a challenge. 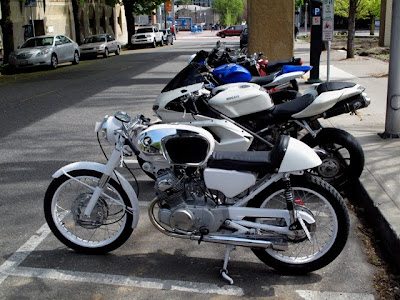 As I rode past Portland State University this afternoon I looked over at  the motorcycle parking area as I usually do.  I thought this white beauty was a Beemer cafe racer so I went around the block to check it out. 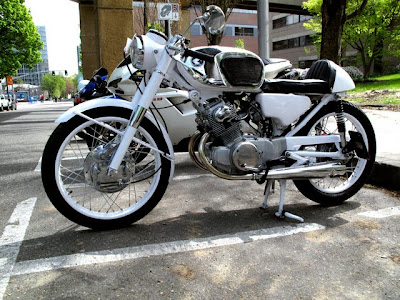 It's a Honda but I'm not sure what model.  It's either a replica bike or one that's restored. The "toaster tank" reminds me of the Honda 50 I use to ride. 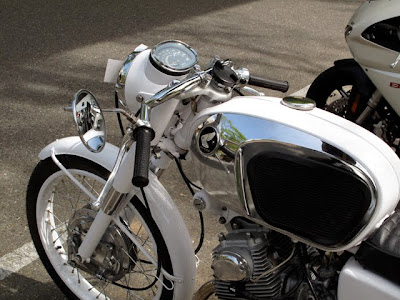 I like the shape of the handle bars.  This bike was really clean! 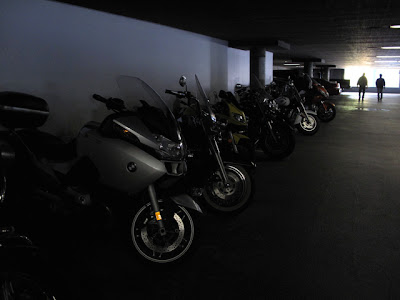 Once a month I go to the Portland VA Hospital.  There are always a lot of bikes lined along this wall on the ground floor of the parking structure.  I parked between two beautiful Harleys today.  As a matter of fact, vets apparently like Harleys because there are usually a lot of them there.
I had to throw in a parking structure photo, it was too tempting.  The way the light filtered in and put those guys into silhouette and the gleam off the front wheels was too much to resist.
Posted by Mike at 8:57 PM 11 comments: 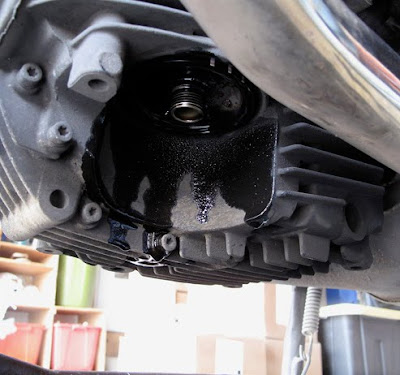 Well, I did it.  The big switcheroo. Crossing the point of no return.  Messing with something that isn't broke. I should mention at this point I tend to lean towards the conservative side of things.  I'm not progressive by nature.  I generally don't step out of my comfort zone and maybe that's true of some.  But wait, I'm already getting off track.

I'm talking about switching from dinosaur oil to synthetic.  BMW engines have a longer break-in period so it's recommended by BMW to wait at least until 18,000 miles to make the switch. I have about 24,500 on the clock.  I told you I lean conservative.

I went to the dealer and asked one of the service guys if there's anything special that I need to do in order to make the switch.  He said no and that it sounds funny but my engine will learn to adapt to the new oil.  That does sound funny.  Pretty cool though, my engine has the capability of learning.  Man, those Germans think of everything! 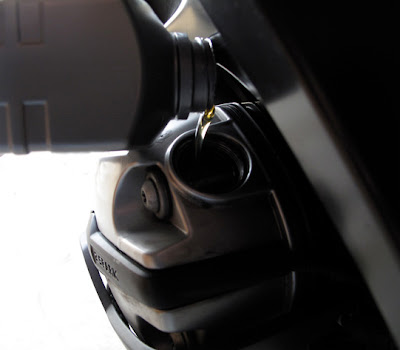 So I just started pouring it in.  No fanfare, no drum roll, no thunder and lightening.  It quietly went into the crankcase and that was that.

I did that yesterday afternoon and due to various chores that had to be done I couldn't even squeak in a test ride.  I had to just count on my engine doing a little learning on it's own overnight. 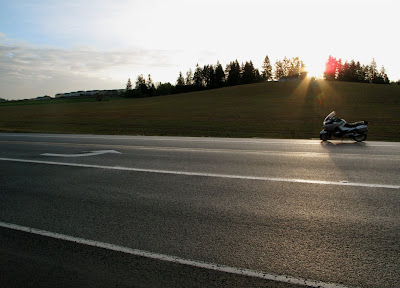 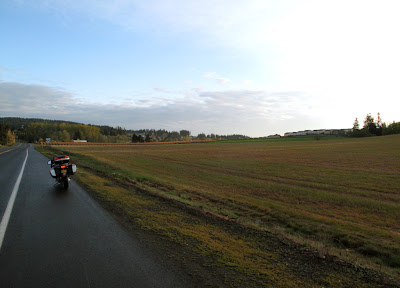 Nah, I didn't feel all those things.  I'm just kidding.  It was just another oil change but an excuse to post some photos.

The weather is suppose to be better this week so I guess we'll get in some more learning.  I hope your weather is good too!
Posted by Mike at 4:45 PM 12 comments: 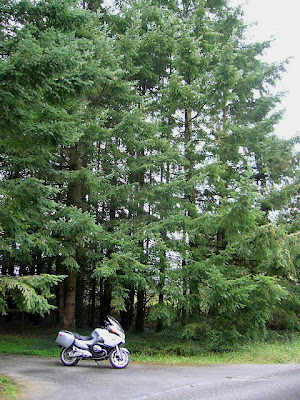 While riding this afternoon I had that realization again of being grateful for being alive and having the ability to enjoy God's wonderful creation.  Yesterday I was in the Columbia Gorge taking in all the beauty and grandeur of that amazing area. 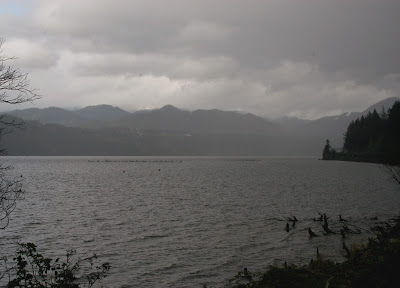 During the spring we get a mixed bag of weather, sometimes within the same day.  Storms blow in and out quickly.  Above is an image taken yesterday afternoon looking up the Columbia River to the east. 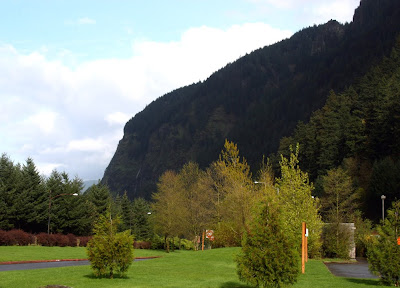 About an hour later the sun was out as seen from the parking lot of Multnomah Falls.  For more images from the falls look here.

A side effect of riding is to become an amateur weather buff.  I like that.  Weather is another aspect that brings me closer to the reality of this wonderful creation.

I hope you're enjoying your part of the world!
Posted by Mike at 7:11 PM 9 comments: This is how the Beemer looked early Thursday morning after opening the garage door.  Just a trace of morning light was glancing off the side.  Not having its starter button pressed in almost a week it seemed to have a cold and lonely look.

I was leaving the house for the 170 mile trip to Roseburg but with the temperature at 39 (F), the starter button wouldn't be pressed that morning either.  I'm not opposed to riding in 39 degree weather but to sustain that for 3 hours is beyond my scope of what I call enjoyable riding.

We've had cold, wet, and windy weather for most of the week but Thursday turned out to be a nice day. Of course, that's the day I didn't ride. Yesterday the rain and wind came back until this afternoon. 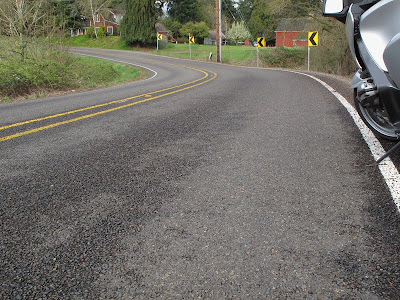 Some might remember from a previous post in which I wrote about a Saturday afternoon ritual I have of making a yogurt run.  We like the yogurt but I really like the excuse to ride on Saturday afternoons and not be concerned about the weather.  This afternoon I pressed the starter button again and reconnected with my machine. 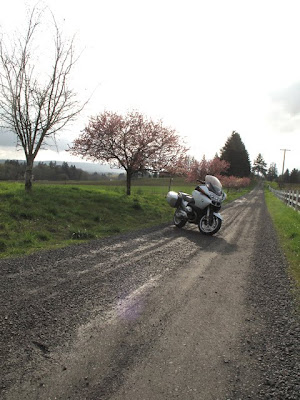 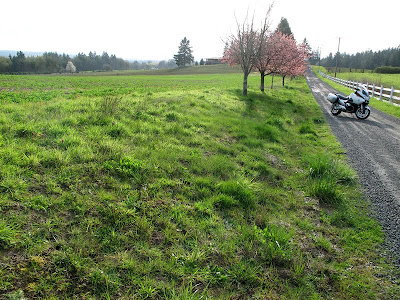 It was great to get out on the road again; to hold on to the handle bars and feel the pull of the engine.  And it's always fun to stop and take some photos along the way.  I took the long way home on some backroads.  I couldn't go too far though because the yogurt had to get home. Next time I go a week without riding I'll have to remember to ride first then get the yogurt.

I hope you've been pressing your starter button these days.

I wish you and your family a blessed Easter!
Posted by Mike at 8:40 PM 5 comments: