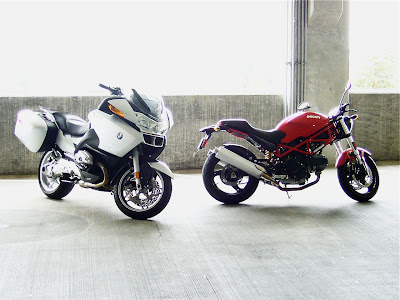 I haven't ridden since last Saturday due to the weather.  We've had temps in the 20's & 30's (F) all week with a touch of snow and ice.  The other night while looking through some photos I found this intentionally underexposed, I mean overexposed shot and decided to post it. Maybe it could be a photo for an article on Germany vs. Italy... or maybe not 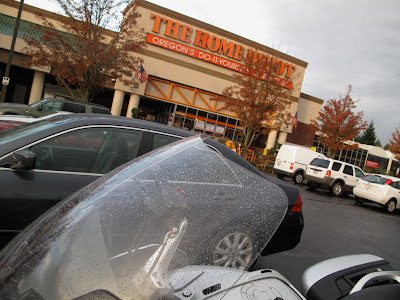 My wonderful wife, Amber, bought a Dyson vacuum cleaner on Tuesday.  Having two dogs and two cats our kids keep telling us that we certainly qualify for a Dyson so we splurged and are now proud owners.  Wow, that thing really... picks up.  I won't say the other word.  Since I'm the designated vacuum guy at our house, I'm now in hog-heaven! 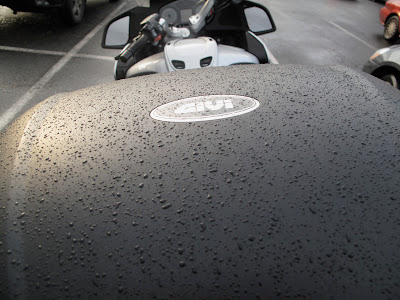 Anyway, yesterday we noticed that many retail stores, including Home Depot,  have the same vacuum on sale for "Black Friday" for $39 less than what we paid on Tuesday.  So my mission today was to go back to the store with the ad in hand along with our receipt. 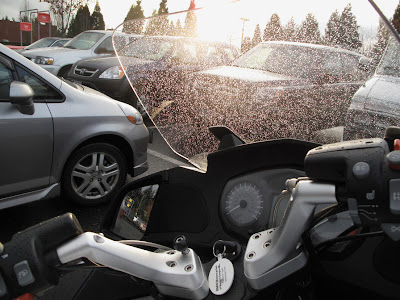 I was surprised at first because the return lady seemed like she wasn't going to honor the new sale price.  She said it was a special deal for this weekend only.  So I asked her to price match Lowe's, Best Buy, and others. Eventually we got it worked out and all was good.  Working in retail on Black Friday has got to be a challenging ordeal.  Amber did it for many years in our early lives. 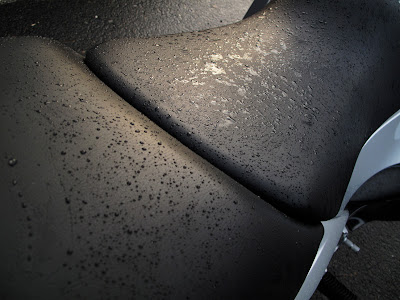 The trip to the store and the return home were dry but while inside the beemer got a little shower.  I find that a ride after several days of not riding to be a little sweeter than usual.

As I rode up the hill towards our house, feeling the pull of the bike and hearing the high pitched hum of the motor, I felt the warm feeling of gratitude again. Several things came to mind but the ongoing enjoyment of riding a motorcycle for transportation usually triggers the gratitude.

Even quick errands on Black Friday are a gift. 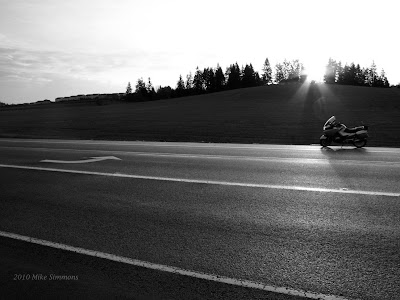 As I write this the temperature outside is 35 (F).  They say it'll snow tomorrow but we'll see.  Snow or not it's too cold to safely ride, in my humble opinion.

Yesterday morning I rode to a breakfast meeting in light rain at 39 (F).  The photo above is not from yesterday.  I decided to post this one because it reminds me of the delight I get from beginning a day of riding.  What a privilege it is.

At the breakfast meeting I was asked why I ride a motorcycle.  Actually the question was, "Why do you ride a motorcycle at your age?"  I said, "Because it gets in your blood."  I guess there will come a day when I have to stop, but until that day I'm grateful for the experience. 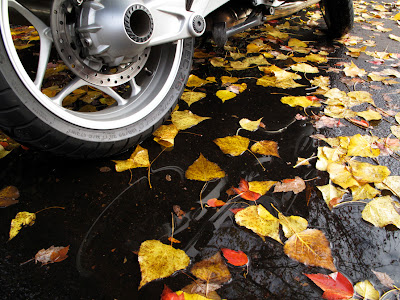 I've probably written this before, so please excuse me if I have, but this is my favorite time of year.  The cool crisp air and the autumn colors trigger an internal awareness that the holidays are fast approaching.  It's a great time for family, food and photos.  And of course riding through the colors and the unique lighting are both special too. 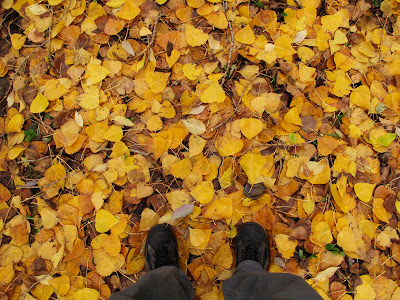 When I was a kid my dad and I would rake the leaves each Saturday morning.  I was highly encouraged to do this weekly ritual before playing with my buddies.  Now a leaf blower does the trick.  I wish we had one of those back in the day! 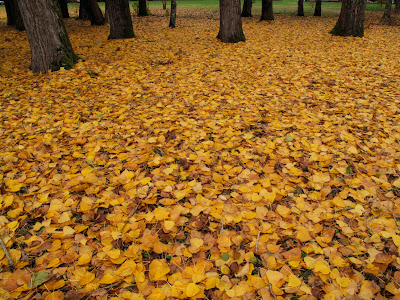 These leaf shots were taken yesterday on the campus of Oregon State University.  A few weeks ago I wrote on the other blog that when I see scenes like this it reminds me of pumpkin pie or eggnog. I guess another internal trigger. 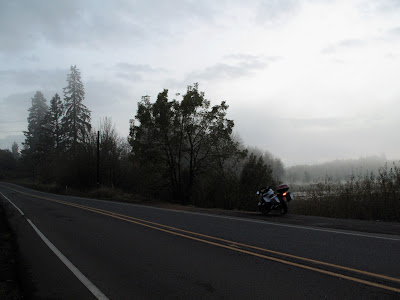 The fog was rolling in on the ride home this evening after working at the jail.  I've lightened the photo a little to make things more visible.  To the right is a familiar field that I call "The big field".   Most recently corn was growing there. 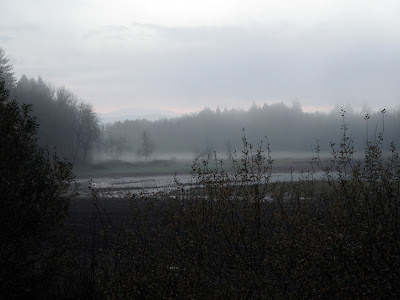 Here is part of the field with fog muting the trees in the distance.  Next spring the field will be filled with water and look like a lake.  It's a favorite spot for taking photos depending on the lighting.

After taking the photo above I turned around to walk back to the bike.  I noticed flashing lights.  It was a county sheriff motor-cop who stopped to make sure I was okay.  We've waved to one another on this road before.  I told him I just stopped to take photos of the distant fog.  He agreed that it's a good spot.  I thanked him for stopping and told him I appreciated it.  Pretty cool, tax dollars at work. 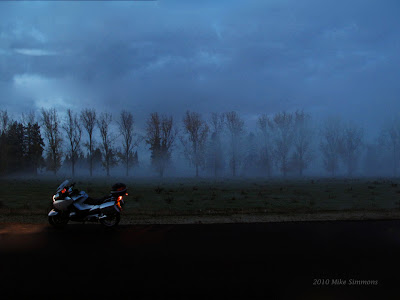 I take a longer way home on Fridays.  I think of it as sort of a treat after the work-week and being sprung out of jail.  Not that those two things are bad but rather it's the first time of the week where I don't have to be somewhere at a certain time.  The official beginning of the weekend and what better way to start than riding.

As it got darker and foggier the lighting became more intriguing.  More evidence of the season.

As the days get shorter I seem to get a little sluggish; feeling like I don't have as much drive to work on unfinished projects around the house.  Maybe I should be gathering pumpkin pies for hibernation.  Nah, better keep the projects going so I can ride guilt free.

Thoughts While on a Southern Oregon Trip 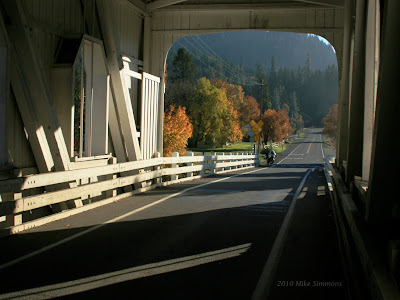 (Grave Creek Covered Bridge - Josephine County, OR)
Wednesday morning I left for Southern Oregon for a couple of days of work mixed with short times of being a tourist.  Okay, I was pretending to be a tourist after enjoy the travels of Gary's USA Tour on a Harley and George's Riding the USA.  The weather was forecast to be dry and the temperature to be relatively mild with the high both days in the mid 60's F.  That translates into, "Go ride!" - especially in November.

As I headed down I-5 in the dark it was slightly overcast with gusty winds.  About 25 miles south of Portland the wind was gone making for an enjoyable time to watch how the sunrise would develop.  Cruising along like this I like hearing the high-pitched hum of the motor below me. 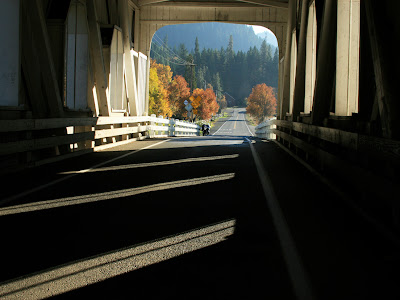 By the way, is it possible to fall asleep while riding?  I've always had the ability to fall asleep anywhere and at anytime.  Being a salesman for almost 40 years I've logged many miles behind the windshield of the various cars I've owned.  Thank God I haven't fallen asleep but I've come close a number of times.  In the late 70's I use to leave the house twice a week at 6 am to drive to part of my sales territory in the desert near Los Angeles.  One morning I was startled by the raised pavement markers between the lanes.  I guess I should call them "Wake-up markers."

I've been thinking that it would be hard to fall asleep while riding.  Maybe it's like falling asleep while walking - there's just too much going on.  I ride with a slight touch of fear.  Then there's the necessity to keep the eyes moving and anticipate what others could do.  Those two factors alone should be enough to take away the threat of sleep.  Plus there's the ability to crack the visor and keep cold fresh air flowing.  Well, Wednesday morning I think I was on the edge of testing this question.  The first warning signal for the potential to fall asleep was riding in not much traffic.  The threat from others was taken away.  Then I began to day dream followed by a yawning fit.  Then I got a little drowsy.  Just the thought of being drowsy while riding gave me the same jolt as the "Wake-up markers".  Then everything was okay again.  Whew, I don't want to test that theory again.

The sunrise was nice and at times I saw places where I wanted to stop and snap a photo.  I usually think about it when I make this run and it's tempting to stop but too dangerous on I-5.  About 75 miles south of Portland and just north of Eugene the weather turned foggy and cold.  The fog lifted in Eugene but a low overcast remained until Roseburg where I work for most of Wednesday.

Just north of Grants Pass, OR there is an area nestled in the mountains called Sunny Valley.   The Grave Creek covered bridge is one of the few remaining covered bridges in Southern Oregon.  I've stopped here before but not put the photos on the blog.  Wednesday afternoon about 4:00 I stopped to get some shots with the sun low in the sky. 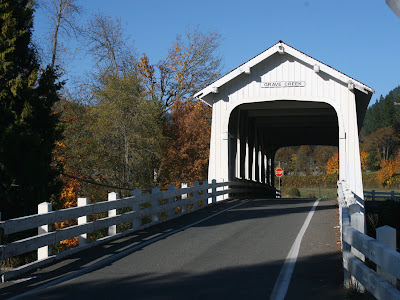 At one time (in the early 1920's) Oregon had as many as 450 covered bridges.  Now that number is down to 50.  I have a plan to visit as many as I can in my travels.  The plan is also to get the beemer pictured with each one.  You can see a map of their locations on this link. 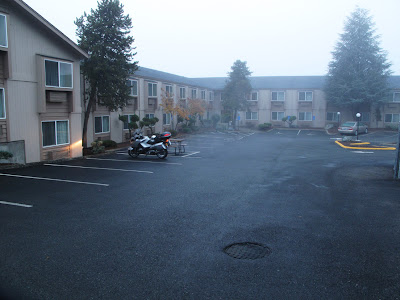 Thursday morning in Grants Pass was foggy and in the high 40's F.  It's really feeling like autumn lately.  The parking lot looks empty and November looks like a bleak month here.

The continental breakfast is good, it's just that they don't have a place for people to sit down and eat.  So you have to pack as much as you can in your pockets so that you can unlock the door to get back into the building and your room. 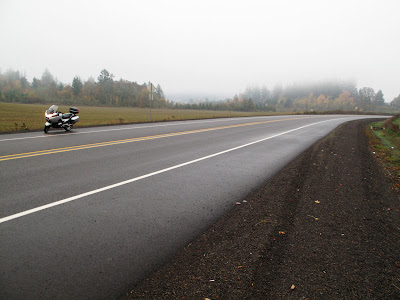 After seeing some accounts in Grants Pass I rode south about 30 miles to Medford and Ashland to visit more customers.  I made it back to Grants Pass for lunch then saw another account before working my way north. 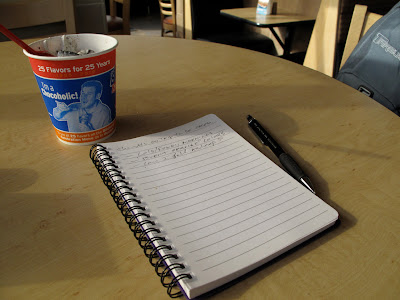 I have to confess, I have this little routine when I make this trip.  I stop at a Dairy Queen in Sutherlin just north of Roseburg.  It's the perfect snack at just the right time of the afternoon.  It gives me the chance to stretch, get fuel, and use the facilities.  Another confession; the older I get I seem to be what the cup above says... a chocoholic. 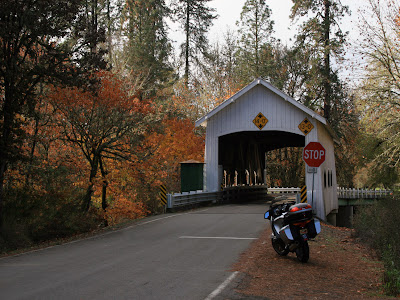 The next stop was the Rochester Covered Bridge.  This bridge is about 3 miles from the Dairy Queen.  It was almost torched years ago but managed to survive and was remodeled in 1969. 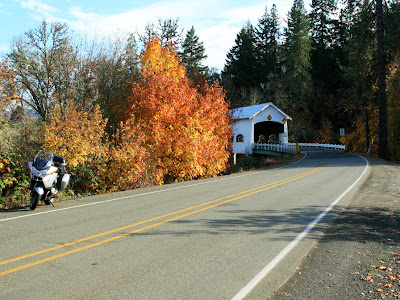 The bridge has a nice sound when cars pass through.  The floor-boards rumble giving it an old-time sound. 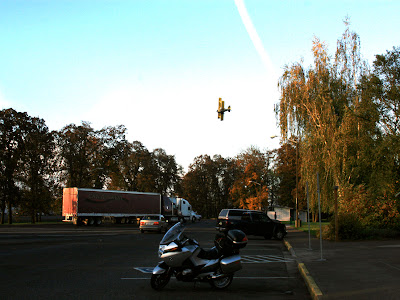 My next stop is the rest stop north of Eugene.  It was beginning to get dark so it was time to change to the clear visor.  I've seen this biplane crop duster before making his exaggerated oval pattern early in the morning.  Because his property is right next to I-5, he makes some of his turns low and right over the highway.  He was flying late on Thursday.  It was quite a sight. 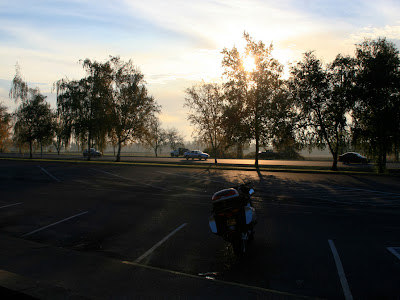 The beemer looks anxious to get back on the road so we do.  With about 80 miles to go it was a nice ride while the sun is setting.  It was dark when I got into the Portland area.  It was another nice mini-trip which makes me only dream about taking an extended one.

This summer when I took my rear tire to the dealer to get a new one installed, I was waiting for the place to open when I met some people gathering there for a ride to Mt. Saint Helens.   A Harley rider showed me photos still in his camera from a ride with a couple of buddies to the Grand Canyon.  I told him I'd like to do that someday.  He said, "You just have to do it.  Don't keep talking about doing it, just do it."